Pipe tobacco differs from hand rolling tobaccos in that it is generally shredded and cut much thicker. The reason for this is that a thicker cut tobacco gives an easier smoke as air can pass through it whilst in the bowl of the pipe with far less resistance. Hand rolling tobaccos are cut much thinner, as this makes rolling easier and the smoke easier to inhale.

There are four main types of tobacco cuts:

Shag - The finest shred of pipe tobacco, in which the leaves are shredded into long, but extremely thin pieces. Gives a fiery burn and is extremely popular, even though in Edwardian England it was considered a thing of the poor. The majority of shag tobaccos contain a high amount of virginia tobacco, as their longer leaves allow this cut.

Ribbon Cut - Similar to cigarette tobacco in cut.  Ribbon Cut is pressed and then cut into long thin ribbons. Slower and cooler burning than shag.

Navy Cut - A cut originating from the times of the pipe smoking navy, when tobacco was tightly twisted into canvas tubes, then sliced. Many modern navy cut tobaccos are steeped in rum, as was the tradition by sailors in the past. Slow burning.

Flake - Tobaccos cut this way are pressed into a tight "brick" of leaf, and then cut into small flakes, which do vary in their size from brand to brand. They tend to be cool burning, are immensely popular, and are almost all made from pure virginia. 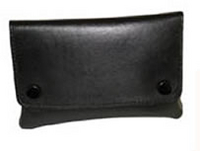 It is of the utmost importance that your pipe tobacco is kept fresh, so that it does not lose it's flavour or dry out. Dry tobacco results in a harsh burn and hideous aroma, so keeping the moisture in the tobacco is extremely important. Consider splashing out on a leather or vinyl tobacco pouch (roll up pouches work best, ones with zips tend to lose air and moisture) which will keep your tobacco fresh.

You can (for long term storage) also consider using a tin or a cigar humidor , which will the keep the humidity around the tobacco constant (around 70% is best) to retain moisture and flavour for when you smoke it in your pipe. Whatever you decide to store your tobacco in, it is best to keep the container out of direct sunlight and in a cool place, but not freezing, just below room temperature is ideal. You can also purchase humidifying disks to place among the tobacco in order to keep the humidity constant.