What Makes a Cuban Cigar So Good? 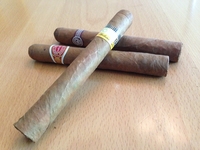 Cuban cigars are famous across the globe for being the very best cigars on the market, the cream of the crop when it comes to the world of cigars. But who knows what it is that makes these cigars so brilliant? Well, it comes down to that the fact that Cuban manufacturers have been producing these cigars since the reign of King Philip of Spain is the 1500s. Currently, Cubans cigar industry is directly controlled and regulated by the Cuban government. The government supervisor serves as Quality Control and ensures that every cigar leaving the factory is properly produced, rolled and that it doesn’t contain any flaws or imperfections.

These cigars stand head and shoulders above the rest because they are made with high-quality materials, and a lot of care and attention has been put into making them, it takes over 100 different steps to create a single Cuban cigar. The industry follows a specific cigar creation ritual that has been passed down, and in the past 100 years ago it has largely remained unaltered. This care to attention is what makes Cuban cigars such a fine smoke.

However, these Cuban cigars are not so easily available, there are many fakes in the market that buyers unbeknownst buy thinking they are getting the real deal. The fact of the matter is that Cuban cigars outside of Cuba are very rare. This only adds to the covertness of this product, forbidden fruit as it were. They were already very popular in the united states when president JFK made an embargo against Cuba in the early 1960s. these cigars became even more popular after this event.

Not for the Faint of Heart

Cuban cigars are produced with exclusively Cuban tobacco. This is in contrast to other kinds of cigars, which contain a blend of tobaccos from different areas of the globe. Smokers do not realise that most smokers find the blend of various types of tobacco, but those who are aware will know that the strongest and best cigars are Cuban. These cigars should not be smoked light-heartedly as they have a pungent aroma and taste – could well knock your socks off – and for that reason, non-smokers often don’t enjoy them.